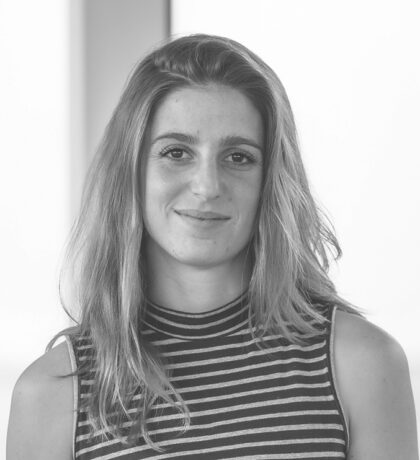 A native of Ajaccio, Corsica, Raphaëlle Renucci is immersed in the world of classical music from her very early years. At the age of nineteen, she discovers contemporary dance and joins the Conservatoire Régional de Bordeaux, all the while pursuing her university studies in human and sports science. She leaves for Montreal, Canada, in the context of a dance student exchange at the University of Quebec in Montreal, where she discovers the Quebec choreographic scene. She joins the École de danse contemporaine de Montréal, from which she earns her diploma in May 2018. Raphaëlles’ interest in choreography, leads her to produce and present a number of her creations, notably at the Passerelle 840 at the University of Quebec in Montreal in 2015, and as part of the tour of Cégep en Spectacle across Quebec in 2016, as well as the Vous Êtes Ici in Montreal, in September 2016. She collaborates as a performer with various artists and choreographers, such as Compagnie Vox, Le Cirque de Soleil, Manon Oligny, Andres Skeels, the Ensemble Volte, and the Flamant collective. She dances and plays the cello, in the production Echos.