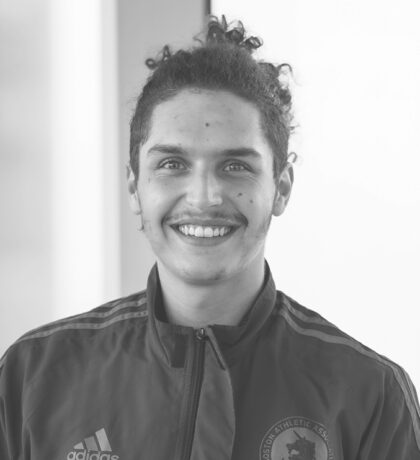 Julien Derradj began his performing career in 2014 with the Compagnie au Fait in Lyon. The following year, he begins studies at l’école supérieure du Centre National de Danse Contemporaine d’Angers. He receives his diploma in 2017, and moves to Quebec, where he pursues his choreographic research in the Master’s program in dance at the Université du Québec à Montréal. At the same time, he gains considerable experience teaching dance. Involved with youth, he passes on a passion for movement to large numbers of children be they in educational day cares, or adolescent audiences. As a choreographer, Julien has been presenting his own creations as well as those of Compagnie Le Rorqual, of which he is a co-founding member. In 2020, he joins the Sursaut Dance Company as a dancer in the production Echos.